GUIYANG, Feb. 5 (Xinhua) -- President Xi Jinping has sent New Year's greetings to Chinese people of all ethnic groups, wishing happiness and good fortune for the people and prosperity for the nation.

Xi, also general secretary of the Communist Party of China Central Committee and chairman of the Central Military Commission, extended the greetings during an inspection trip in southwest China's Guizhou Province prior to the Chinese New Year, which falls on Feb. 12 this year.

The trip took Xi to places including the city of Bijie and the provincial capital Guiyang. He visited a village, a residential community and a supermarket from Wednesday to Friday. Enditem 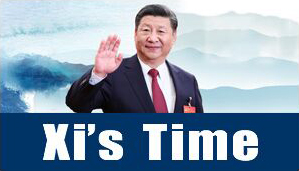